Casio G-Shock Adds To Its Popular Master Of G Series With New, All Blackout Timepieces 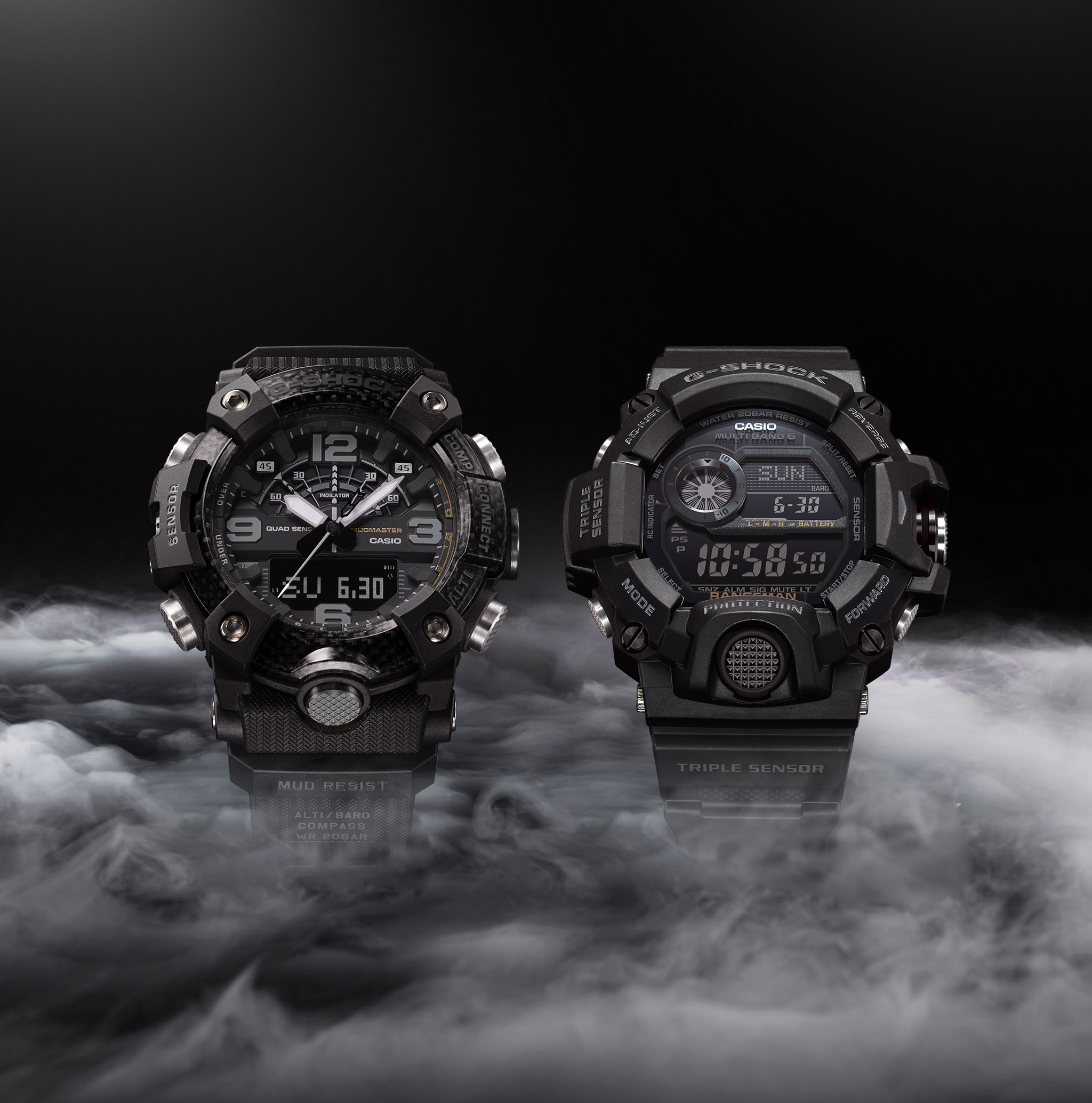 DOVER, N.J., January 7, 2019 – Today, G-SHOCK announces the latest additions to its Master of G series of tough and rugged timepieces, the GW9400-1B and GGB100-1B . The new releases arrive in a sleek black colorway perfect to pair with any look, and come equipped with Shock Resistance and multiple sensors, making them capable of tracking and keeping sensor readings at your fingertips.
GGB100-1B , the latest MUDMASTER model features Quad-sensors- compass, thermometer, barometer, and step tracker – to further enhance its location and step tracking capabilities. At the heart of its Mud Resistant design is a Carbon Core Guard Structure and three-layered carbon-insert bezel, providing durability in a lightweight case. In addition, a fine resin cover over a stainless-steel panel back keeps the watch airtight, as well as a filter that avoids the intrusion of dirt, allowing it to exhibit strong mud resistance in harsh environments. Two-Way Time Sync combines Bluetooth Connectivity to pair with smart phones via the G-SHOCK connected app and Multi-Band 6 Atomic Timekeeping for self-adjusting, accurate hour / date display virtually anywhere on the globe.
The RANGEMAN, GW9400-1B, features Triple sensors-compass, thermometer, and barometer technology, a sealed mud resistant case & buttons to prevent mud, dirt and dust from getting into the watch, as well as cylindrical buttons to provide outstanding operation and improved resistance to impact. The RANGEMAN also comes equipped with solar battery charging, sunrise/sunset data, one-touch time recording, one-touch elapsed time measurement, making this watch perfect for rangers, rescue crews, and anyone else whose profession or activities demand unfailing reliability.

The two new timepieces also boast standard G-SHOCK technology such as:
The GGB100-1B, will retail for $380 and the GW9400-1B will retail for $330. Both models will be available for purchase in late February, 2020 at G-SHOCK retailers including Macy’s, the G-SHOCK Soho Store, and G-SHOCK

About G-SHOCKCASIO’s shock-resistant G-SHOCK watch is synonymous with toughness, born from the developer Mr. Ibe’s dream of ‘creating a watch that never breaks’. Over 200 handmade samples were created and tested to destruction until finally in 1983 the first, now iconic G-SHOCK hit the streets of Japan and began to establish itself as ‘the toughest watch of all time’. Each watch encompasses the 7 elements; electric shock resistance, gravity resistance, low temperature resistance, vibration resistance, water resistance, shock resistance and toughness. The watch is packed with Casio innovations and technologies to prevent it from suffering direct shock; this includes internal components protected with urethane and suspended timekeeping modules inside the watch structure. Since its launch, G-SHOCK has continued to evolve, continuing to support on Mr. Ibe’s mantra “never, never give up." carolgoodrow.com